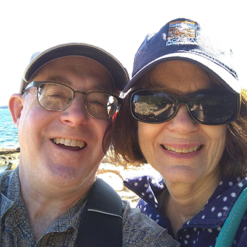 Susan and John have their own small business and have always had to purchase insurance for themselves. Unfortunately, with Sue’s rheumatoid arthritis, they always wound up paying high premiums and higher out of pocket costs each year. Now they finally have a plan through the exchange that is a much more reasonable cost with significantly better coverage. Sue transitioned into Medicare a few months after their new insurance started, but John is not yet eligible for Medicare and is happy with his current plan.

Sue and John run a small business, “It’s just the two of us,” Sue said. As a long time sufferer of rheumatoid arthritis, Sue felt it was important that they have insurance, so they purchased their plan through the individual marketplace. “We had huge bills,” Sue said, “We paid up to $10,000 a year on premiums, with out of pocket costs on top of that.” Sue’s multiple joint replacement surgeries meant that there were several years where Sue alone used up their entire $3000/person deductible. Since they had to meet their deductible before insurance chipped in at all, they wound up spending a great deal out of pocket each year. “It definitely affected our business,” Sue said, explaining that they had to make choices for their business needs based on predicted health care costs. “One-year rabies shots wiped out our entire deductible,” Sue said. “We had a 20th anniversary trip to Canada planned, so that went down the drain.”

On several occasions, Sue and John have tried to limit their costs through cost comparisons. “We would call with questions, but no one can tell you a price, because they don’t know,” John said. When Sue was preparing for a joint replacement, “No one could give us any figures, even if we gave them all of our information,” John said. “We had to just go in blind and pay for it.”

Another time, the couple had a close encounter with a bat. “We started thinking, you shouldn’t touch a bat,” John said. “Then we went online, and that was all dire news. We called our doctor who told us to go to the ER.” At the ER, the health care providers discussed what to do, going so far as to call the CDC, before deciding to give the couple the rabies vaccine. “You don’t have much of a choice with rabies,” John said. “Because if you got it, once you start to actually show symptoms, it’s too late.” They started their shots that night, then the nurse suggested it would be cheaper to get the rest of the series of shots from their regular doctor. “It never really occurred to me to talk about the cost,” John said. When they talked to the doctor about the shots, they were informed that their doctor did not give the shots because it was too expensive. That’s when they decided to call insurance and see how much of their deductible was left. “They told me, ‘Oh you used that up last night,'” John said. “We spent $11,000 in one night and the price was never discussed until the end,” John said that their total bill for their series of shots ended up being $23,000, and he said that they were lucky that they had savings to pay off the bills.

When the exchanges opened on Oct. 1, John found the process frustrating. Once he got through the application, he said his choices were not too difficult. Having only Anthem and Community Options Providers to choose from, John chose the latter, “I have not been thrilled with Anthem in the past,” John said. He called Community Options and they were able to walk through plan options with him. John ended up choosing a silver plan with a $2500 deductible (a great improvement on his last deductible of $6500). His out of pocket maximum did not change much from his old plan at $6500. “Overall, it’s definitely better,” John said.

Sue was particularly pleased that John could begin to go to physical therapy for his back. Since they only have a $20 co-pay for PT, going in is much more affordable for John than when he had to pay 100% of the cost until meeting the deductible. “He never felt like he could spend money for treatment issues and not feel like we are going bankrupt,” Sue said. “Before we had the 100% deductible,” John said. “Now we have some co-pays, which is nice. We are able to get some health care that we wouldn’t have before.”

“I feel much better about this plan on the whole,” John said.

With some of their savings, they are looking forward to a 25th anniversary trip to New Orleans.